The Most Imperfect of Daisies What could be simpler than making a sugar daisy that is composed of just a few petals and a center that are all held together with either edible glue or with wire? Well, that’s what I thought, but apparently, like so many other crafts, what appears to be easy and straightforward when demonstrated by an instructor who has done hundreds of flowers, isn’t quite so simple a process for the newbie or wannabe.

My first daisy started off with making the center which I textured using a tea strainer as shown by the expert. I even added more texture by snipping both at the sides and at the top of the daisy-to-be with a small cuticle scissors purchased especially for this project. The only problem with this method was that unlike that of the experienced demonstrator, my textured center kept moving about wiggling on the wire as I worked. That of course led to me squeezing it down much more firmly, and then, in turn, it needed to be textured all over again. The result was a seemingly unending loop of stabilizing and texturing that continued on and on for what seemed like hours.

After a badly needed break of a day, I decided to venture on to construct the petals. I did have a plastic all in one petal cutter, but I was determined to cut and wire each one separately. So I rolled the gum paste out onto my groove board and then used my all in one cutter to carve out each grooved petal individually. Positioning the plastic cutter that encompassed an entire flower was a bit tricky, but twenty petals and much discarded gum paste later, I did get the hang of things. That, of course, was followed by wiring the entire batch of petals. Invariably, though, the wire managed to poke thru the bulge embossed by the groove board. Next time, if there will be a next time, I will make an effort to have thicker grooves, to use wire even thinner than the 32 gauge that I employed, and to use white wire instead of green so that when it does poke thru the drying paste the wire will be much less obvious. But most important, before starting this process or anything similar, I will definitely take a deep breath…and then take something to steady my nerves…and my hands!

The expert suggested not waiting for the petals to dry completely before arranging them, in order to insure greater malleability. Consequently, there was no time for dawdling, no time for procrastinating and no time to regain my confidence.

I started out by opening up a brand new package of leaf green colored double stick floral tape only to find that it had no stick to it at all, not even on one side! After scavenging thru my drawers, I did come across a small amount of dark green tape that was left on an old roll and forgotten about, buried under some seldom used silver salad forks. Immediately, I proceeded to slice strips of the tape lengthwise in half. In the past I cut corners and disregarded this step and the stems of those flowers showed that exceedingly well in all of their bulky glory. Now began the balancing act of holding the wired center in one hand while positioning twenty wired petals with the other. A much needed third hand really would have been useful for pulling and twirling the tape! The flower master, ingeniously, made it all look so down right doable and by a mere two handed human!

As I mentioned before, I was using petals that were not quite dry, the idea behind that being that they would be less brittle. Less brittle supposedly means less breakage. The thing is, how does one tell the dryness of gum paste, without touching it??? In short, none of my petals broke as a result of being dry, but several did limp and collapse as the wire cut thru their still semi pliable and too soft state of existence.

Several hours later and with nerves completely shot, I do have a sort of daisy, complete with a textured calyx and an over abundance of petal dust. The instructor did say that there are many varieties of daisies out there, so I guess I could maintain that mine is based on a variation that has yet to be discovered. 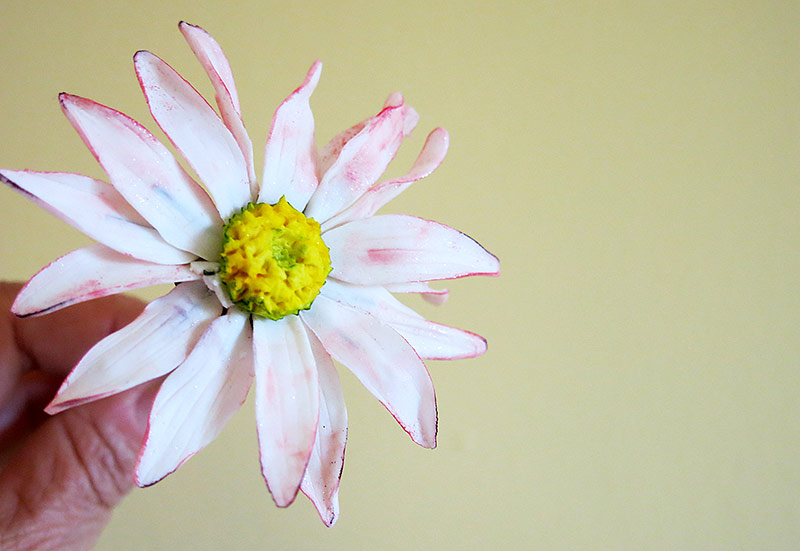 Now, onwards, to try my luck at making some accompanying buds and a couple of frilly looking daisy leaves.