Frilling It My Way There are countless cake decorators who frill and ruffle fondant to add dimension, interest, glamour, and even clothes to their edible creations.

The first time that I saw a tutorial on frilling, I just assumed that that was the way that it had to be done, complete with a ball tool and a special soft foam pad. The ball tool never did work for me and I never quite got the hang of keeping it half on the fondant or gum paste and half off. All of my efforts resulted in either a too thick ruffle or a torn one. Only afterwards did I come upon tutorials that used cell pins and dresden tools and then the light bulb in my mind started to shine with the realization that, as with many other skills, there wasn’t just one way to achieve it. All that I had to do was to find what worked best for me.

Most of the flower and ribbon friller decorators that I came across used either gum paste or fondant combined with tylose or CMC. I am not a fan of gum paste I guess because I’m a fairly slow worker and whenever I’ve tried to use either it or the homemade combo variety, I’ve ended up with cracks and tears. My favorite medium to date is modeling chocolate, but every site that I came upon warned that modeling chocolate couldn’t be rolled thin enough to obtain the delicate ruffles that we all strive for. Some where along the way I decided not to accept blindly all that I read even when the writers and instructors were masters in their techniques. Below is an example of a birthday cake frilled with modeling chocolate. 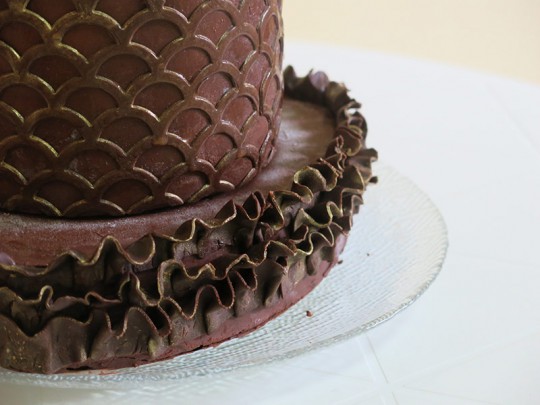 They certainly aren’t the finest of ruffles, but the method does work. Since modeling chocolate stays where it’s put, these ruffles weren’t influenced by gravity. And in addition I had no problems with keeping this cake in the fridge even after the placement of the ruffles. I’m not sure whether fondant or gum paste would have survived.

Since these were far from being the most delicate of frills, I did an experiment of combining fondant (Satin Ice, in this case) with my homemade modeling chocolate. This was a double experiment because it was also the first time ever that I was using my new completely natural colors (Trucolor gel powders that were made especially for use with butter cream). Since I wasn’t sure how the blue that I was aiming for would react with my yellow tinged white modeling chocolate, I first colored the fondant adding in as little water as possible and adding corn starch as needed to maintain the consistency of the dough. I then combined two parts fondant with one part modeling chocolate. I was concerned about ending up with green, but these proportions kept my blue the hue that I was after.

The whole point of combining the modeling chocolate with the fondant was to enable me to make the frills in advance and to be able to store them for several days without them cracking when I would eventually try to stick them around a cake. I was hoping that the modeling chocolate with its flexible nature would allow for my way of working. I get pressured easily and don’t enjoy the tension of having to make cake accessories at pretty much the last moment. I much prefer to make EVERYTHING in advance and then to just attach it all to the cake the day prior to the event. Just the thought of having to do all the frilling the day before would have made me back away from this design altogether.

Then the question arose of how to best thin my paste combination, via rolling pin or via pasta machine. I much prefer short steps and with as little clean up as possible, to mix in one bowl if at all possible and to use as few pieces of equipment as the process will allow. I do have a pasta machine, but I keep it boxed up so using it would require the effort of taking it out of the cabinet, unboxing it, attaching it to my counter and then cleaning it afterwards. Much simpler to just use my non stick rolling pin that is readily available! But the rolling pin and the space that I had available didn’t seem compatible with long strips of paste waiting to be frilled. So, instead, I rolled out the “dough” one part at a time and as thinly as possible and then used two circle cutters to form the strips. I figured that the jagged outer edge would add quality to the frill as would the straightening of the rounded half circles that would be produced.

My paste rolled as thinly as I could with the rolling pin. Not bad, I think for a rolling pin and one third modeling chocolate. 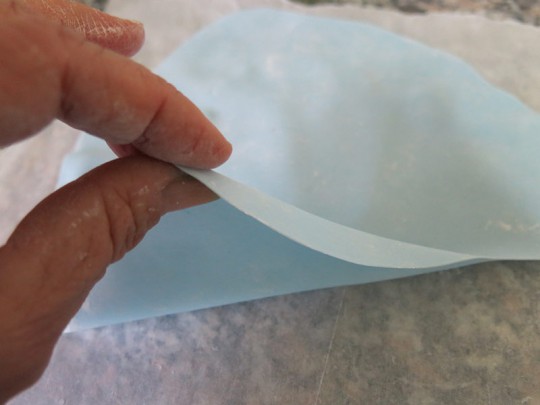 In the end, I chose the bone tool to do the frilling. 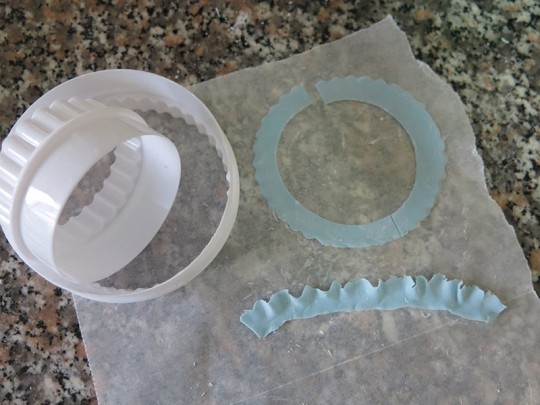 Some of my fifty six strips of frills under nylon waiting patiently to be applied to the cake. 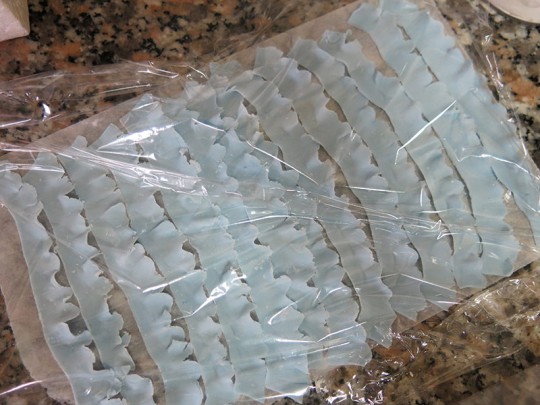 And lastly, my frilled cake. 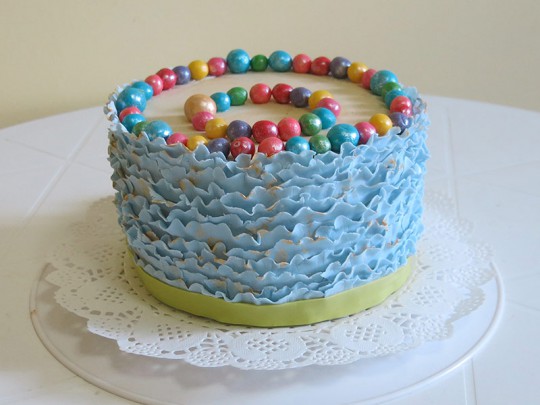 P.S. I am not affiliated or associated with either Satin Ice fondant or with Trucolor gel coloring powder that were mentioned in this article. I just like and use the products.