The Doggie in the Photograph My ongoing mantra of “let it be a challenge” definitely worked overtime the other day.

My daughter asked me to make a dog topper to sit on top of a small cake that would be given to her physical therapist as a thank you gift. I’ve made stylized modeling chocolate sitting dog toppers in the past, the kind that are based on vertical cone shapes with all four legs facing forward, but this one was to be based on a photograph of the therapist’s beloved pet. 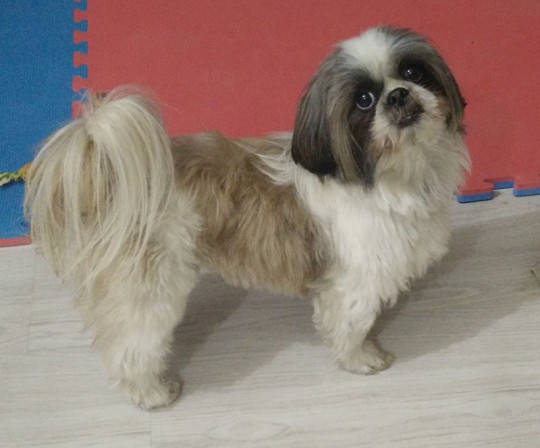 The first photos that were sent to me were of no help at all. They didn’t show the tail or the height of the legs. There was nothing on which to base proportion. Then I received a third photo and was told what an adorable and loving fellow this pup was and that I should try to capture that in the sugar dough sculpture. I do love animals and am quite partial to cats and dogs, but I just did not feel any connection with this one…and no motivation at all to work on the project.

But my daughter requested and I aim to please.

At first, I thought that I would go for the typical sitting position using the cone center and that I would just try to get the colors right and the face as close to the original as I could. So that’s what I started to do but it just didn’t feel right. This was for an adult, not for a young child’s birthday.

Then I figured that I would approach my challenge by using modeling chocolate silhouettes as a guide. Usually, my silhouettes stay two dimensional and either I adhere them to the front of a cake or add a toothpick to the bottom and have them stand up erect on the top. This time however, I was going to use the silhouette as a skeleton and hoped to build it up to a proper 3D model.

I cut two silhouettes thinking that I would add bulk and then sandwich that mass between the two flat pieces which would then be smoothed out on the outside. In the back of my mind I kept hearing Liz’s voice. Liz was my ceramics instructor several years back. Liz used to tell us to use our eyes and then to add volume to the areas that should be thicker. So that’s what I did and this is what it looked like. Uggh! 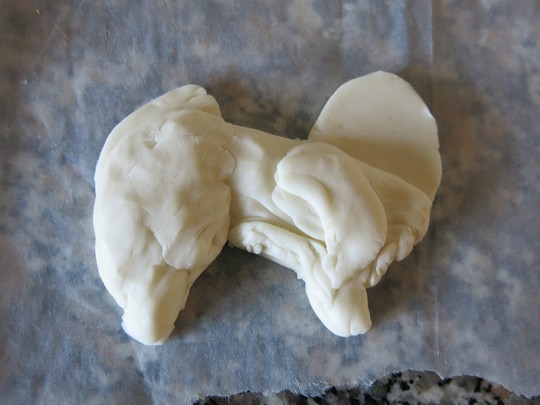 Frustration is the only word that I can use to describe how I felt, but the only other possibility would be to tell my daughter that I couldn’t do it…and that was just not an option at all!

So I kept on, building “fat”, “muscle” and dimension on one side and then smoothing it out. The beauty of modeling chocolate, of course! But actually in this case and in most of what I try to do, I use a combination of fifty percent modeling chocolate and fifty percent fondant. The modeling chocolate keeps the figure flexible enough to smooth out easily without cracking and the fondant seems to help it dry more firmly when I’m ready for it to do so. 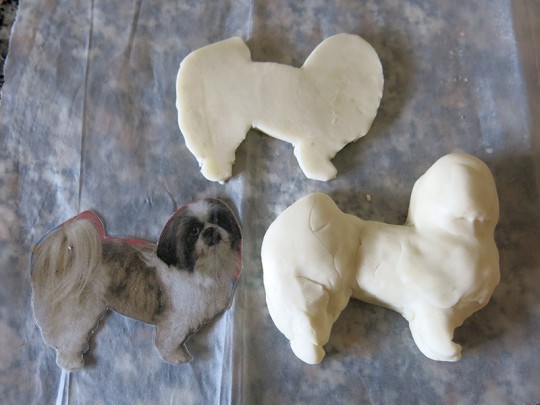 But this poor little dog was only half 3D! The reverse side still had the flat silhouette! My initial vision of sandwiching bulk between the two flat pieces didn’t seem viable so I just added more of the modeling chocolate fondant combination to the reverse side of the single silhouette and simply cut off whatever seemed to protrude.

Then came the fun part of adding on varied patches of greys and browns. The strands of the long fluffy tail were done with the aid of an extruder, and a Dresden tool helped with the fur marks as well as with the placement of the muzzle, the eyes and the floppy ears. Eyes are problematic for me, but I think that I didn’t do too poorly for not having a tutorial to follow.

Here he is before I remembered to add on his little red tongue. 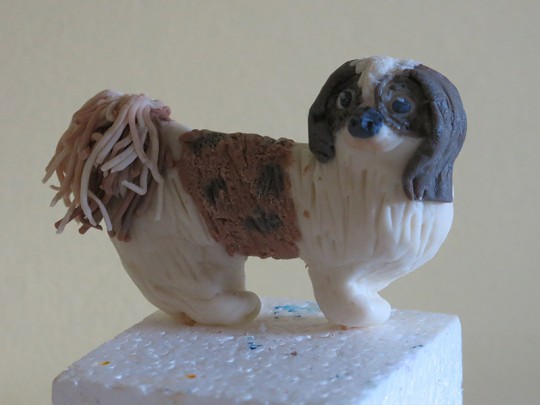